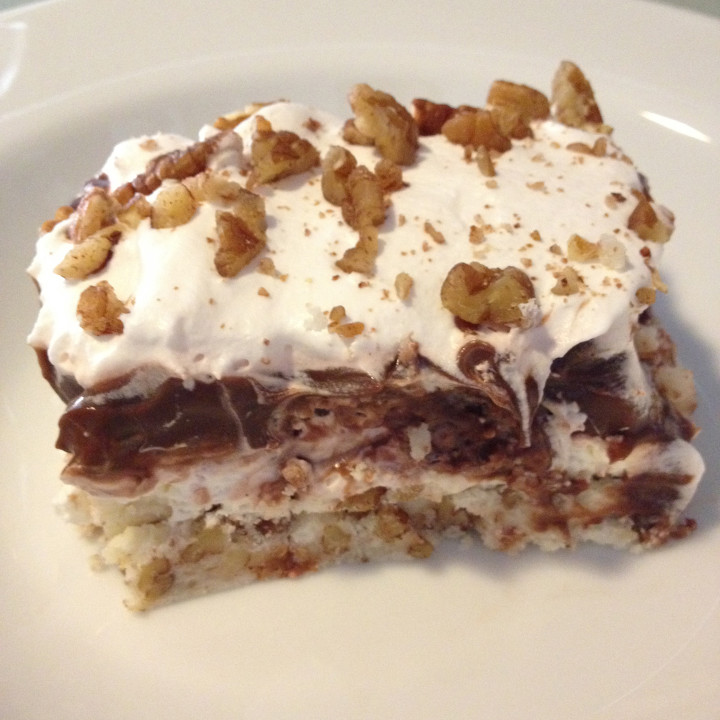 Preheat oven to 375. Chop pecans, and set aside a tablespoon or two to sprinkle on top when you are done. Combine GF bisquick, melted butter, sugar and pecans. Press into 913 baking dish. Bake for 10-15 minutes, and let cool completely.

Mix one container of cool whip with the softened cream cheese. Spread evenly over cooled crust. Mix both packages of pudding with milk, and spread on top of cream cheese layer. Spread the second package of cool whip on top of the pudding, and sprinkle with chopped pecans. Cut into square and serve, and refrigerate any leftovers.

Tips: I like to chop my pecans in the food processor, it helps them be more evenly distributed in the crust.

It’s easier to mix the cream cheese and cool whip with a stand mixer. Use the whisk attachment to keep the cool whip fluffy.

Pop the baking dish in the fridge after adding the pudding, before adding the final layer of cool whip. This will help the pudding set up so it doesn’t wind up getting mixed in with the cool whip while you are spreading it.

Tutorial: How to Sew a Ruffled Drawstring Bag for Your Ballet Shoes